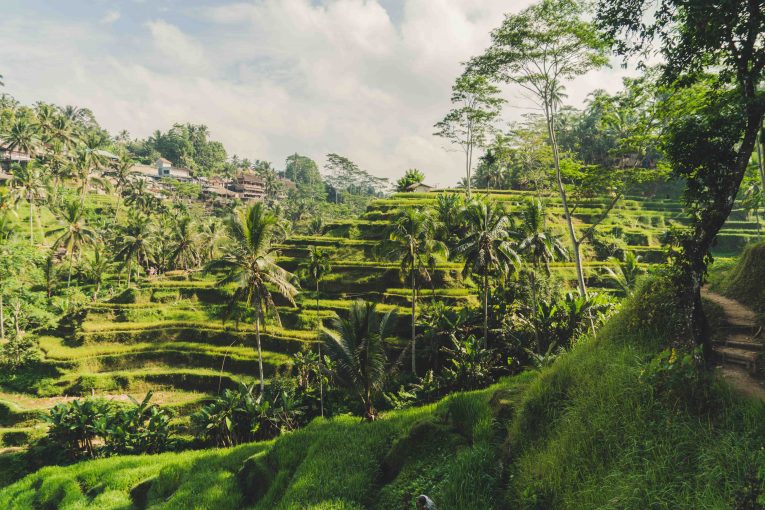 3 marketing lessons from the rice fields of Bali

Our time here in Bali has come to an end. I’m about to hit send on this thing, get into a Bluebird Cab and head for the airport.

Here’s my favorite pic the whole trip - my wife and I braving Bali’s notoriously insane traffic on a scooter - and surviving! Next stop the vibrant city that never sleeps - Bangkok, Thailand.

At least for a few days, before I head down to Pattaya to speak at David Cavanagh’s 8-day Internet Marketing event. Plus catch up with my large friend and amazing marketer Rob Wiser who’s also speaking.

But cruising Bali’s roads on a scooter presents several instructive marketing lessons in itself.

Ever since a giant pothole at dusk caused us to fall off a scooter in Pyin Oo Lwin, Burma a couple of years back, my wife has generally been against scooters. And this wasn’t helped when a dear friend had a bad accident on one in Phuket.

When we go to a new city, we usually like to check out the transportation situation - I can’t stand getting on a goddamn bus, but trains are cool. And if they’ve got Uber or Grab, we’ll use them.

But Bali has no trains and notoriously unreliable and overcharging Grab drivers. The Bluebird cabs seem OK but for this trip, she eventually caved to my bitching and we rented a scooter.

Lesson #1: Never take the first ‘no’ for an answer. It takes an average of 16 touches to get a prospect to take action, according to some often-quoted study by assorted gurus.

So, out into the open road we headed. Actually, that’s not true - there might be open roads way up north, but around the touristy areas - you’re lucky if you can get into top gear. If you’ve been here you’ll know the traffic is CRAZY - and the first time I went through that INSANE roundabout near the airport, the one where everybody just barges through at the same time, I was shitting bricks.

I wish we coulda taken a pic of it - but my wife had gripped me in a bearhug of pure fear… and quite understandably. The deal is you just go into the intersection at some point, and hope not to die.

Lesson #2: The thing you once feared to do can be tamed. I’ve never been to Vietnam, but I reckon I could ride anywhere now. So if you’ve been hesitant to jump into something, especially if you’re worried about losing money - your fears are unfounded.

Back home, if you’re silly enough to turn on the news you’re a good chance of seeing a news story about some Aussie getting into a scooter accident in Bali. And there certainly are so many Aussies here, it does increase the odds of this happening.

But as you can probably imagine - the reality of the situation here does not quite match the perception they would have you believe.

Even though I saw some pretty crazy stuff out on the roads, I didn’t see one accident. It’s never a good thing to be involved in one when you’re exposed on a little scooter in dense, moving traffic, but I don’t think we ever really came close to actually having one.

Lesson #3: What everybody else is telling you is 90% crap. Especially people or organizations who would benefit from you having a false belief.

Look, we all want to get ahead, right?

We do what it takes to make it.

You and I - we’re honest business owners. We might embellish things now and then in our marketing hype - but we’d never lie to our customers.

Unfortunately, the reality of planet earth is that we can’t assume others follow the same code.

The fact is the liars and crooks out there never last long, but there are always new ones springing up to take their place.

For example I’m currently interviewing some web designers on Upwork for a new project. And 2 separate freelancers sent me matching lists of websites they’d supposedly created themselves.

Here’s a pro tip to use this for good: You can make a lot more sales when you present information that creates a certain belief in your prospect, and this belief causes them to buy.

For example, if you’re selling a course on how to trade stocks - a lot of people would naturally worry about the state of the market and the economy as they’re seeing your pitch.

The belief you need to install in them is the belief that: This IS A Good Time To Start Trading Stocks.

So you can present proof, arguments, sales copy to support your claims that it IS a good time to start trading stocks, and that removes as major objection your prospects have.

Remember this for each and every promotion you create: You need to give your prospect the belief that This IS A Good Time To Start _______

This is just 1 of the ‘copywriting beliefs’ I have in a special checklist called ‘The 12 Copywriting Beliefs’. There’s 12 beliefs you must create within the mind of your prospect, before they will buy your product. All 12 are on this checklist you can use when you write any promotion.

If you grabbed my ‘Instant Copy Templates’ pack already, you’ll have this report in your members area already.

If not - it’s time to rectify this terrible situation. Go here to grab your copy now.