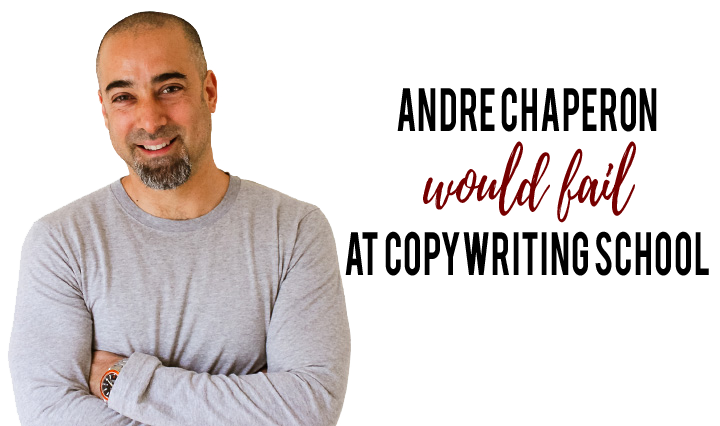 If you’re on Andre Chaperon’s email list (and if you want to persuade, you should be) you might have seen his recent birthday special where he discounted his courses.

I tried to grab his latest course – but it wouldn’t go through.

So I reached out to Andre directly and though he’s rarely on Facebook, he personally organized the course access and let me know he actually blocks transactions from SE Asia, since it’s where most of his fraud has come from.

But what’s way more interesting than that is when we got to talking about copywriting & persuasion.

Check out this snippet below:

This blew my mind.

Cause stuff like Autoresponder Madness is required reading for all copywriters at Mindvalley, and I would say the same for any copywriter.

It was using what he teaches there that allowed me to write email funnels that generate up to 1.2M on autopilot year after year.

Let’s go down the rabbit hole of what he’s talking about here.

Smart business owners know that the ability to convert a prospect into a customer is one of the most valuable things you can do. It’s one of the highest paying skills you can master.

This is why the copywriting industry is growing all the time – once you learn the ropes, it’s an easy business to jump into, let’s you work 100% online, and if you’re good you can charge some pretty big fees.

But what Andre does, and what I’m starting to do, is move from copywriting to connection.

Andre is all about Connection.

He says “I know how to tell story and how to connect and move people. But not within some “copy” framework”.

Look carefully for the distinction here.

The best persuaders in the world don’t label themselves as ‘copywriters’.

They don’t stick themselves into such a limiting framework.

Templates and frameworks can only get you so far.

Especially in jaded niches like internet marketing, where Andre’s ‘copy’ is some of the most persuasive out there.

Because sometimes those frameworks are too rigid. They get in the way of the genuine human connection you need to really persuade.

Ironically most copywriting experts are teaching parts of this in an unconsciously competent way.

We’re taught to write to people one on one, make a connection, with feeling and emotion.

Many times we do this in bits and pieces.

It’s all part of learning to grow out of the copywriter’s framework and grow into the persuader you were born to become.

Andre Chaperon would seem to be a natural.

Us mere mortals however, we gotta do the hard yards and work our way up to the top.

So if you’re more interested in connection than copying templates, check out Andre’s site here. No affiliate link.